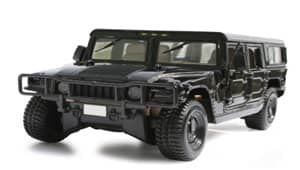 The Louisville Metro Police Department (LMPD) is investigating a fatal accident in which a Hummer allegedly dragged a motorcycle for 2½ miles before stopping. Specific details about the accident have not yet been released, but officials are questioning whether the accident was a hit-and-run or caused by a dangerous road.

A recent motorcycle accident in Okolona took the life of 25-year-old Brandon Grigsby. According to wdrb.com, Grigsby either hit a guardrail or collided with a 2006 Hummer – or both – on Blue Lick Road in Okolona. Although the specific details about how the accident occurred are still under investigation, police say that the Hummer somehow managed to drag the motorcycle for two-and-a-half miles before stopping.  The local coroner’s office revealed that Grigsby, although wearing a helmet, died from multiple blunt force injuries.

Although initially labeled a hit-and-run, police now say that may not be the case at all. Residents in the area told wdrb.com that the section of road where the accident occurred is very dangerous. In fact, so many accidents have occurred in this area that the state has been planning to widen the Blue Lick Road for quite some time.  Unfortunately, the project has yet to be started.

According to Andrea Clifford, a spokesperson for the Kentucky Transportation Cabinet, a redesign phase delayed the start of construction when the scope of the project was reduced from five to three lanes – meaning that there will be one lane in each direction and a third continuous turn lane in the middle. Clifford said the roadway redesign involves diminishing the sharpness of the curve.

Construction is now scheduled to begin in late 2014. While the improvements may help to save lives in the future, they do nothing for Grigsby or his family.

Determining liability in a motorcycle accident isn’t always cut and dry – as this case proves. It’s possible that the state could be liable in this situation if it knew that this stretch of road was defectively designed, failed to fix known dangers or neglected to warn drivers about known risks.

However, it’s also possible that the driver of the Hummer was at fault. Given that the driver, in this case, dragged the bike for 2½ miles before stopping, the latter seems more possible.

According to Greg Bubalo, Mananging Partner at the Becker Law Office, the sheer size difference between a motorcycle and a truck can have dangerous consequences:

“Many drivers simply do not see motorcycle riders or do not understand how to safely share the road with them,” Mr. Bubalo said. “This can have devastating consequences when a motorcycle accident results from the careless acts of a driver. In many of these types of cases, the negligence of a driver is directly responsible for causing a motorcycle accident.”

Motorcycle Accident Injuries Can Be Severe

Some of the most common injuries that a motorcycle rider is likely to suffer in an accident can include:

Regardless of the type of injuries suffered, chances are that they will result in the need for expensive medical care and may have lifelong on victims and their families. Make sure you get the compensation you deserve by contacting an experienced motorcycle accident lawyer who has your best interests at heart.