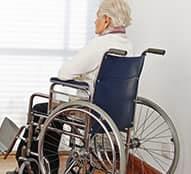 The statistics pertaining to traumatic brain injury in the United States and Kentucky are alarming. A TBI can cause lasting brain damage that affects the victim’s quality of life and is costly in terms of medical  expenses, lost work and productivity. 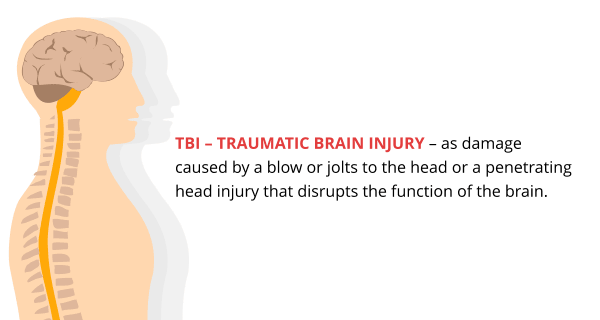 The Brain Injury Alliance of Kentucky defines TBI – traumatic brain injury – as damage caused by a blow or jolts to the head or a penetrating head injury that disrupts the function of the brain. It is also referred to as acquired brain injury.

Mild brain injuries are known as concussions. Most people recover fully from a concussion, though one concussion makes the victim more vulnerable to subsequent concussions. Moderate and severe brain injuries can cause short- or long-term problems with cognitive and motor function, impaired hearing and vision, personality changes and depression.

Moderate and severe TBIs are associated with an increased risk of Alzheimer’s disease, according to the Brain Trauma Foundation.

At least 5.3 million Americans —2 percent of the U.S. population— currently live with disabilities resulting from TBI. 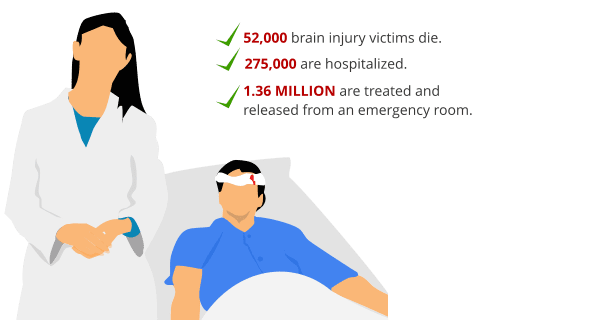 Each year in the U.S., approximately 1.7 million people suffer a TBI, according to the Centers for Disease Control and Prevention (CDC). About 52,000 brain injury victims die, 275,000 are hospitalized, and 1.36 million are treated and released from an emergency room. An estimated 124,626 people with TBI experience long-term impairment or disability from their injury.

The estimated economic cost of TBI in 2010, including direct and indirect medical costs, was approximately $76.5 billion, according to the CDC. The cost of fatal brain injuries and those requiring hospitalization accounts for approximately 90 percent of the total TBI medical costs.

Causes of TBI in Kentucky

In Kentucky, motor vehicle accidents are the most frequent cause of traumatic brain injury and death related to brain injuries. Teenagers, especially boys and young men, are the most likely to sustain a TBI in a car accident, motorcycle accident, ATV accident or diving accident. Teens in Kentucky are involved in one in 10 deaths on Kentucky highways and one in six of the severe injuries.

Across the U.S., the leading causes of TBI in order of frequency are:

Falls cause half of all TBIs in children up to age 14 and 60 percent of TBIs in adults age 65 and older, according to the CDC. About one-half of fatal falls among older adults are due to brain injury. Adults ages 75 years or older have the highest rates of TBI-related hospitalization and death. 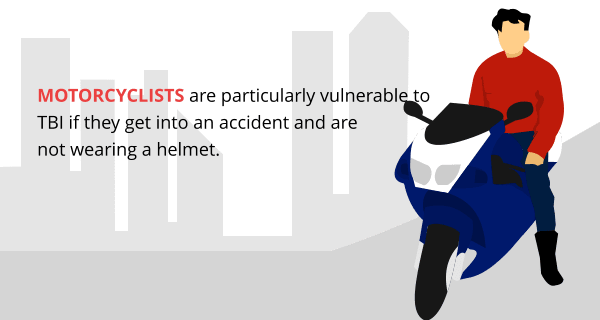 Motorcyclists are particularly vulnerable to TBI if they get into an accident and are not wearing a helmet. The National Highway Traffic Safety Administration (NHTSA) says helmets are estimated to be 37 percent effective in preventing fatal injuries to motorcycle riders and 41 percent for motorcycle passengers. This means that, for every 100 motorcycle riders killed in crashes while not wearing helmets, 37 of them could have been saved had all 100 worn helmets.

The NHTSA estimates that helmets saved the lives of 1,630 motorcyclists in 2013.

Nineteen states and Washington, D.C. require all motorcycle riders to wear helmets, according to the Governors Highway Safety Association (GHSA). Kentucky is not among them. Kentucky requires riders younger than 21 or licensed for less than a year to wear a helmet. 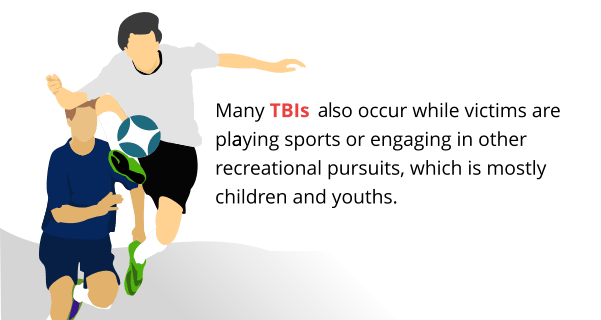 Many TBIs also occur while victims are playing sports or engaging in other recreational pursuits, which is mostly children and youths.

Safe Kids Worldwide says about 163,000 children visit emergency rooms with concussion-related injuries every year. Athletes ages 12 to 15 make up almost half of the sports-related concussions seen in the ER each year.

The CDC says the recreational activities associated with the greatest number of such emergency room visits related to TBI are: 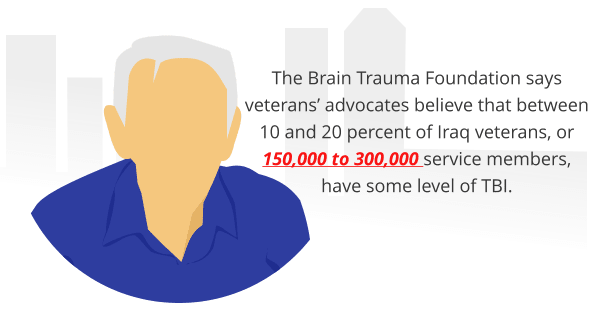 Among active duty military personnel in war zones, exposure to blasts are a leading cause of TBI. The Brain Trauma Foundation says veterans’ advocates believe that between 10 and 20 percent of Iraq veterans, or 150,000 to 300,000 service members, have some level of TBI. Thirty percent of soldiers admitted to Walter Reed Army Medical Center have been diagnosed as having had a TBI.

If you have sustained a head injury or brain injury in an accident caused by another person, let a brain injury lawyer explain your legal options for obtaining compensation to help pay your medical bills and other expenses.