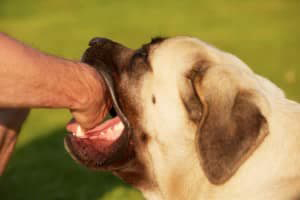 The arrival of warmer weather means people will be spending more time outside. However, as outdoor activities increase, so does the number of dog bite injuries, especially among children who often end up being the victims of a dog attack.

The YouTube video that recently went viral is the perfect example of this. In it, a four-year-old boy was playing in his front yard and was suddenly attacked by a dog that came out of nowhere. Although the video went viral because the family cat attacked the dog and sent it on its way, it shows how dog attacks can occur.

Many dog bite accidents begin when a child simply tries to pet an animal. A child may not recognize that a dog is feeling threatened until the dog bites. While many owners may think their dog is friendly, the dog may not react around unfamiliar people the way the owner anticipates. In other cases, unmonitored dogs can simply turn on kids playing for no reason whatsoever.

Children are the most common dog bite victims. When you pit any dog against a small child, the chances are that the child may end up with serious injuries, permanent scars – both physically and emotionally – and possibly rabies if the dog has not been properly vaccinated. Unfortunately, dog bites are very common. The Humane Society reports that there are nearly 5 million dog bites every year in the United States – approximately 800,000 of which require victims to seek medical care. The question becomes, who is liable?

What Happens When a Dog Bites a Child?

Kentucky has a strict liability law when it comes to dog bites. Victims can make a claim against the dog’s owner, or someone who is caring for a dog in the owner’s absence, in order to receive compensation for their injuries, such as for medical costs, lost wages, and other losses that resulted from the injuries, including compensation for pain. Even if a dog owner claims that their dog has never been vicious in the past or did not realize that their dog had gotten loose, in most cases dog bite victims can still recover.

While most dog bite victims would seek personal injury compensation from a dog owner’s homeowner’s insurance policy, collecting from those who rent has traditionally been more difficult if they don’t have renter’s insurance or sufficient funds to pay for the injuries caused by their dog.

According to a 2012 Kentucky court decision, landlords may be held liable for injuries that a tenant’s dog causes if the landlord permits the dog to remain on or about the rented property.

The landlord can be liable for these injuries even if he or she was unaware that the dog is dangerous. If the dog bite or attack happens on or immediately adjacent to the landlord’s property, the landlord may be required to compensate accident victims.

What happens when the dog’s owner or the landlord claims that their dog was provoked? In those situations, comparative liability rules will apply – meaning that the injured victim’s damages can be reduced based on his or her degree of fault. So, if a dog bite resulted in $10,000 worth of damages, but the victim was 10% responsible, then the amount would be reduced to $9,000.

The bottom line is that Kentucky law provides solid ground for dog bite victims to seek restitution for their injuries. An experienced dog bite lawyer can analyze your situation, determine your legal options and help you to get the compensation you deserve.