Why Taking Photos After A Car Crash Is So Critical

The aftermath of a car accident can be chaotic. When you are sitting in a wrecked car and staring through a shattered windshield, knowing what to do next can seem overwhelming. Your first priorities should be to check your condition and the condition of the others involved, call the police, get to a safe location, and seek emergency medical care if needed. Amid the chaos, it may not occur to you to take pictures of the scene of the accident, but it is more important than you may think.

Many people fail to photograph the accident scene because they are in shock immediately following the accident. Others fail to take photos at the scene because they do not realize what powerful evidence car accident photos may provide. Having car accident photos that document the damage and injuries can make the difference between a successful insurance claim and an unsuccessful insurance claim.

The Importance of Car Accident Photos

Photos from the scene of a car accident can show proof of the cause of the accident, what contributing factors may have had a role in the accident, and the extent of damages that victims suffered as a direct result of the impact of the collision.

The photos can show injuries, property damage, vehicle damage, and details that may prove to be relevant to your claim, such as posted traffic signs and who was present at the scene. Also, memory is notoriously unreliable. Having photos of the scene of the accident can help remind you of details that you have forgotten.

During negotiations with insurance adjusters, your photos of the car accident can be presented as evidence to substantiate your injuries and the fault of the other party. Ultimately, car accident photos can help you to build a successful claim and recover the full compensation that you are entitled to for your injuries and damages.

How to Take Car Accident Photos

Knowing what to include in your photos or what kind of shots to get can go a long way in improving the relevance and usefulness of the photos.

Consider these suggestions for capturing the most evidence possible:

Property damage includes internal and external damage to any vehicles involved, damage to another object or building, and damage to a roadway or sign.

In addition to capturing multiple shots of the damage, make sure to photograph any skid marks, debris, or other evidence that the accident occurred.

Take pictures of your injuries.

Taking pictures of your injuries is one of the most important things that you can photograph after a crash. You should take photos of your injuries as soon as possible after they were sustained and in the days following your accident. Some injuries, like bruises, will not show up immediately. As they appear, make sure you document them.

You are probably wondering why taking a picture of a stop sign or a traffic light matters. But knowing that a traffic sign was present when an accident occurred may be a clue in reconstructing how the accident happened.

For instance, overgrown shrubbery at an intersection could make a traffic sign or approaching vehicles harder to see. If there is a picture of a yield sign at an overgrown intersection where the accident occurred, it may imply that the at-fault driver failed to yield. Overgrown shrubbery can be trimmed after an accident, so it is important to take photographs to document conditions, as they existed at the time of the accident.

Photograph witnesses, police officers, and the other driver.

You may not recall all of the people present at the scene of the crash. It may be helpful to know who was there in case you need to talk to them later. Your attorney may want to contact a witness or a police officer about giving testimony.

So take pictures of everyone who is at the scene, including any witnesses, police officers, and the other driver. Passengers should also be photographed.

There will be a number of details about your crash that you may not be able to recall later if you do not record them. Make sure to take pictures of the make, model, and license plate number of the other vehicles, as well as pictures of the driver’s license, insurance, and registration information of the other driver.

Take Photos of the Surrounding Scene.

Getting pictures of the car damage is very important. But context is important as well. There may be elements in the area surrounding the scene of the accident that can be used later as evidence, even if you do not see the relevance at the time you are taking the photos.

Make sure to take pictures of surrounding businesses. One of the businesses could have security cameras that captured the accident on video. Having a photo will help you to remember to contact these businesses later.

Take more pictures than you think you need.

Take more pictures than you think you will need. You never know what you might notice in a picture that you originally missed. Take pictures of everything that you think is relevant, and take pictures of the same thing from multiple angles.

Make sure the time/date stamp on your photos is correct.

What if I Cannot Take Pictures at the Accident Scene Because I Am Injured?

In some instances, a car accident victim will be unable to take photos at the scene because of severe injuries. If that is the case, try to get a family member or friend to take pictures on your behalf as soon as possible. If you are unable to reach someone immediately, certain photos such as photos of your injuries, damages to your vehicle and skid marks can be taken at a later date. Taking pictures at the scene of the accident, however, is always preferable.

How a Kentucky Car Accident Lawyer Can Help You

In Kentucky, a driver’s personal injury protection (PIP) insurance coverage will pay for medical expenses, lost wages, and other expenses up to $10,000 regardless of fault in a car accident, according to the Kentucky Department of Insurance. $10,000 may sound like a substantial amount, but medical bills for injuries can quickly exceed that amount. If you sustain serious injuries, you may end up needing treatment over an extended time, and your bill can easily go above the no-fault award limit.

For claims over $10,000, depending on your insurance coverage and the coverage of the other driver, if at fault, you will need to prove that your injuries were caused by the car accident. Photos will help you make your case. 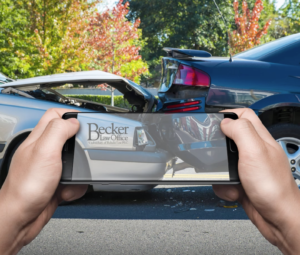 An experienced Kentucky car accident lawyer knows the ins and outs of dealing with insurance companies after a car accident, and the process for approving and denying claims. An attorney can help you make sure you have the evidence you need to be fully compensated for your car accident injuries and damages.

At the Becker Law Office, our attorneys are ready to get to work on your case today. Contact us today for your free consultation, and we’ll help you get on the road to recovery.