Roadside Driver Drug Testing May Be Coming to Kentucky 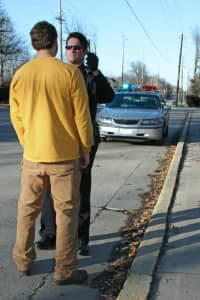 Kentucky state officials are considering whether to use a roadside driver drug test to help combat the growing issue of driving high in the Commonwealth. The Kentucky Office of Highway Safety is testing the accuracy and reliability of portable drug kits in a pilot program that runs through October. The drug kits are being tested on volunteers in Louisville, Paducah and Madison County. The kits have a mouth swab and screening device that can analyze saliva in about 6 minutes for the presence of up to 10 different drugs.

Kentucky lawmakers may decide during the 2016 General Assembly whether to allow portable drug tests a regular part of the tools police use when patrolling Kentucky roads. Kentucky State Police believe that drugs, whether prescription or illegal, played a part in almost 1600 crashes in the Commonwealth in 2014 causing 939 injuries and 214 deaths.

Louisville Metro Police Major Kelly Jones said, “The goal of the swabbing for the state is to make the swab what the portable breathalyzer is to drunk driving.” But the problem with this portable drug test is it does not work like a breathalyzer. Alcohol is detected and remains in the body for a finite period of time after it is consumed, and a breathalyzer can determine the extent of intoxication. It is our understanding that the proposed portable drug tests do not show the current level of impairment, only that drugs are present in the driver’s system. Say, for example, someone smokes marijuana on a Saturday night and is involved in an accident the next Thursday afternoon. If they are tested with a portable drug test, they will test positive for marijuana even though they are no longer under the influence five days later.

There’s no problem with giving police the tools they need to stop impaired driving or testing someone for the presence of drugs after an accident occurs to see if there are drugs present in the system of the drivers involved and whether there is any level of intoxication that may have played a part in causing the accident. The fear is that there will be many potential problems using roadside drug testing. What would be the legal standard for pulling someone over and using the portable drug test? Will this lead to police profiling based on the type of vehicle someone is driving, or in what part of the city someone lives? What about the presence of prescription drugs that are legal and may remain in a person’s system long after the negative effects wear off? There are still a lot of unanswered questions on this issue. Some fear the use of the portable drug testing kits may lead to invasive searches without probable cause and be the first step in stripping away Constitutional rights which exist to prevent illegal searches and seizures protected under the 4th Amendment.

What do you think? Would you support the use of portable roadside driver drug testing and in what situations?