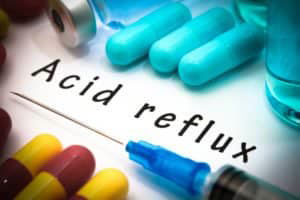 Before you pop a little pill to ward off anticipated heartburn following that rich or spicy meal, consider this: researchers from a new study are warning acid reflux sufferers and healthcare providers that regular, long-time use of certain widely used heartburn drugs more than doubles the risk of developing stomach cancer, the third leading cancer in the United States.

A new study published in the journal Gut found long-time use of PPIs, or proton pump inhibitors, like Protonix, Prevacid, Nexium, and Prilosec, to treat acid reflux and stomach ulcers more than doubles the risk of developing stomach cancer. PPIs are acid reducers typically taken an hour or so before a meal to block proton pumps that produce stomach acid.

Previous research linked long-term PPI use to a number of other health problems including increased risk of heart attack, dementia, kidney problems, bone fractures, and tendon and ligament tears, and this study adds stomach cancer to the list of increased risks and dangerous side effects accompanying PPI-use.

In the study, researchers from the University of Hong Kong and University College London followed 63,397 acid reflux sufferers for an average of 7.5 years, some who took PPIs, and other patients who took a different acid reducer known as an H2 blocker or histamine H2 receptor antagonists, such as Pepcid, Zantac and Tagamet.

Researchers concluded PPI daily users have a 4.55 times higher risk of developing stomach cancer than those who only use PPIs weekly.

Chewable tablets marketed to treat indigestion, heartburn and sour stomach like Rolaids and Tums are antacids containing calcium carbonate and/or magnesium hydroxide tablets whose side effects may include hard or loose stools or bleeding ulcers if the antacids also contain aspirin.

Researchers cautioned healthcare providers to consider alternatives to prescribing long-term use of PPIs because of the newly uncovered cancer risks.

If you’ve been prescribed a PPI, or any medication, don’t be afraid to ask questions of the prescribing healthcare provider.

It’s crucial to be an advocate for yourself and your loved ones especially where life and death medical decisions may be concerned. Don’t be afraid you’ll appear rude. It’s your right to ask questions and to get appropriate answers from your prescribing healthcare provider. If you cannot get answers, it may be wise to consider finding a new healthcare provider and hold off taking any newly prescribed medication until your questions are answered.