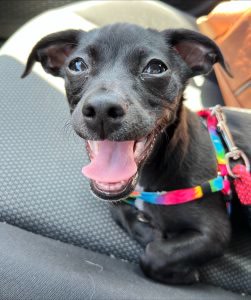 A few short weeks ago, I walked into the Lexington Humane Society with hope in my heart and dog treats in hand. I had been searching for months and had finally received word that a couple of puppies, just born, were up for adoption. Within two hours I had a cart full of puppy pads, food, dog toys, and a sleeping “Walnut” nestled in my arms. The rest, as they say, is history.

I am not alone in my devotion to my newly acquired furry friend. It is estimated that there are over three hundred and ninety-three million pets in America, with eighty-nine million of those pets being dogs. Like many Americans, Walnut goes with me everywhere – the park, his favorite pet store, and sometimes even to the office. My puppy is not just an animal or a possession, Walnut is a best friend, confident, and forever companion. But what happens if Walnut were to be injured by the actions of another? Does the law share my strong feelings about my furry friend?

Unfortunately, the answer is a resounding “no.”

Are animals property or persons?

While every state is different, most states agree: a pet is considered a piece of chattel or property under the law and nothing more. This means that if your pet is injured by someone else’s negligence, you will only be entitled to recover the value of the dog itself. So how do you define a dog’s value? Walnut’s curious bark, floppy ears, and spunky personality are worth their weight in gold to me. However, the law recognizes just how difficult of a task it would be for a judge or an attorney to put a dollar amount on the cuteness of Walnut’s ears or puppy bark.  It is very difficult to put a dollar amount on the value of companionship and emotional support. Therefore, as a resolution to this problem, the law simply values animals for their market value in a commercial context.

So, while your pure pred poodle with a lavish haircut may be valued at the going market rate of $5,000.00, a small oddly proportioned Walnut with bat ears and a mysteriously curled tail, might be valued somewhere around the $300.00 range. Walnut’s winning personality and curly tail are simply not factored into the analysis at all.

Wrongful Death of a Pet

If you are thinking about the cruel repercussions of this fact, rest assured that you are not alone. While there are currently no wrongful death statutes for pets, a Kentucky court recently held that there may be an avenue of recovery for owners suffering from mental anguish and emotional distress because of their furry friend’s death or injury. The court states in pertinent part that an action for intentional infliction of emotional distress is not necessarily barred because the subject at issue is an animal instead of a person. New York has recent cases that have held that an owner may be entitled to damages for their loss of companionship.

Throughout the years, great strides have been made to ensure that animals are treated humanely and America has enjoyed a rich history of prosecuting animal cruelty in criminal courts. However, American civil law is a long way away from recognizing pets and all their incredible worth and enrichment in our lives. Activists and supporters of animal law reform are making progress every day with the hope that one day the law will reflect the true value of the companionship of animals.