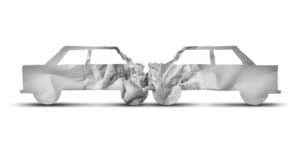 A new Indiana law known as the “move over” law requires drivers to move their vehicles out of the roadway as soon as safely possible after a minor crash. The new law went in to effect July 1, 2016 and applies to crashes on all government-maintained roadways, not just interstates.

The new law requires drivers to move their crashed vehicles out of the roadway as soon as possible after a crash. Exceptions include collisions involving hazardous materials, where one or mores vehicles are inoperable after the crash, or where an injury, death or entrapment occurs because of the crash.

The purpose of the law is to cut down on the number of secondary crashes that follow fender-benders, according to Indiana State Police. Statistics reveal:

An added benefit of the move over law is to facilitate the continued flow of traffic which statistics show is delayed four minutes for every one minute a roadway is blocked from a crash during a high traffic period.

It’s also important to get pictures of the crash on your mobile device after the crash if you can do so safely before moving the vehicles.

Violation of the move over law is a Class C infraction with monetary fine and penalties similar to a speeding ticket.