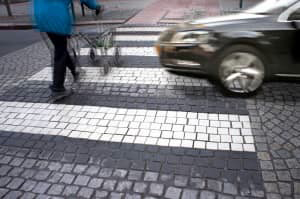 In the last 5 years, Louisville averaged 16 pedestrian deaths a year, exceeding the national average of XX pedestrian fatalities per year.

So often you hear people say, “Pedestrians always have the right of way,” which is legally true, but may not always happen in the real world. Drivers and pedestrians both have rights, but both also bear responsibilities for everyone’s safety on the road. Drivers are often distracted, or simply may not see a pedestrian, and may not follow the rules of the road as pedestrians expect. Pedestrians are often distracted themselves, looking at their smart phones, texting or carrying on an animated conversation, simply assuming that drivers see will them and stop accordingly. Tragically, this often does not happen and the pedestrian always comes out on the losing end when coming up against a vehicle.

We applaud the Mayor’s focus on pedestrian safety and support his efforts to eliminate distractions on Louisville roadways. As Louisville continues to grow, and add bicycle and walking lanes throughout the city, it is incumbent upon each of us to do our part, whether we are the pedestrian or the driver, we all need to pay greater attention so that we can all improve safety and reduce pedestrian injuries in our great city.