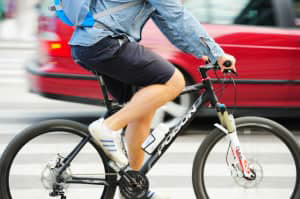 This past week the Kentucky State Senate overwhelmingly passed a bill that would require motorists to give bicyclists a 3-foot safety buffer when passing on a roadway. Cycling is a “growing mode of transportation” said bill sponsor Robin L. Webb, D-Grayson, and Senate Bill 80 encourages bicycling by enhancing safety issues for bicyclists.

The bill outlines that where there is only one lane of traffic in either direction, motorists must allow a 3-foot safety zone between any part of their vehicle and the bicycle, until passing a safe distance beyond the bicyclist. The bill also allows motorists to cross over double yellow center lines to provide for the 3-foot safety zone, so long as this can be done safely, with unobstructed travel and no oncoming traffic; otherwise, motorists should wait until the opposing lane is clear to safely pass the bicyclist.

This bill codifies a common sense approach when motorists and bicyclists encounter one another on the road as an ever-increasing number of people are choosing bicycling for transportation, recreation and health reasons.

25 states have some sort of law requiring motorists to give bicyclists a 3-foot safety zone, but sadly Kentucky and Indiana do not number among those states. This bill would provide a legal basis to protect bicyclists and provides that motorists have a duty to keep a safe distance.

The bill would also require bicyclists to keep to the right but would not force riding on the edge of the road. The buffer zone would also permit bicyclists not to ride immediately next to parked cars where there is always a danger of vehicle doors open suddenly into cyclists’ paths.

Opponents of the bill argue this is nothing more than feel-good tourism legislation, that cyclists create dangerous situations on roads meant only for vehicles used for transportation and commercial reasons.

The bill now goes on to the House for consideration.

We support this bill to keep both bicyclists and motorists safe.