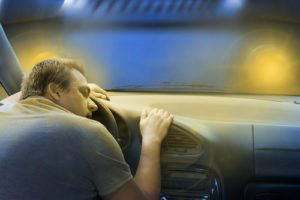 This summer, Chevrolet is sending a safety engineer across the county to raise awareness of the risks of drowsy driving. Fatigued driving accidents are commonplace and particularly dangerous because a sleepy driver is slower to react and brake or swerve to avoid a collision. A drowsy driver may actually nod off behind the wheel and crash at full speed.

Chevrolet is asking local and national journalists to try the car manufacturer’s drowsy driving simulator. It consists of a 23-pound suit to cause the sluggishness your body feels when fatigued, and goggles that replicate frequent blinking associated with drowsy driving.

‘As you get tired, the way we can tell is by your percent of eye closure, so every 10 seconds, the goggles close for one second; this represents being a medium level of drowsy, and mimics your eye pattern when you’re tired,’ Maureen Short, a human factors expert and senior safety engineer for Chevrolet, told an NBC News reporter. ‘If you’re truly drowsy and you nod off, it can be 2 to 4 seconds of eye closure at a time.’

Once suited up, participants in the drowsy driving simulation were asked to drive at a test track. ‘My instructions to keep the car at a constant 20 mph suddenly became a whole lot harder, and I found myself struggling not to ride the brake,’ New York Daily News reporter Dan Gessner wrote. ‘Sharp corners became dreadful, and the weights on my arms, legs and chest weren?t helping either.’

The test drives were at 15-20 mph. Short reminded the NBC reporter, who complained of slowed reaction time due to the fatigue-mimicking weights, that at 60 to 70 miles per hour on a highway the fatigued driver covers a lot more area while reacting more slowly, which greatly increases the risk.

The Risks and Signs of Fatigued Driving

Driver fatigue may contribute to 9.5 percent of all motor vehicle crashes and 10.8 percent of crashes serious enough to be reported to police ‘ far more than federal estimates indicate, the AAA Foundation for Traffic Safety says.

Fatigued Drivers Put Everyone on the Road at Risk.

Part of the problem is that drowsiness occurs over time. Drivers can miss its signs until they are fatigued, which damages their decision-making ‘ including deciding whether to stop driving.

Signs that you are fatigued and should not be driving include:

Your vehicle may have safety features that indicate problems related to drowsiness, such as lane departure warning, lane-keep assist or collision warning and automatic braking. If such a warning was to alert you once, it should serve as a wake-up call. But if you are warned more than once, you are likely incapable of fully waking up, and should not be driving.

Eventually, vehicles may be equipped with technology that specifically addresses drowsy driving.

Several manufacturers, including Audi, Mercedes and Volvo, already offer warning systems that monitor a vehicle’s movements, such as steering wheel angle, lane deviation, time driven and road conditions, according to The New York Times. Other manufacturers and automobile suppliers are working on technological solutions that focus on driver behavior to warn of fatigue before it creates a driving hazard.

The Japanese company Sumitomo Riko Co. Ltd. has developed a new seat cushion that uses conductive rubber electrodes to detect when a driver becomes fatigued and is at risk of falling asleep at the wheel.

Meanwhile, Panasonic has developed an in-car system that detects driver drowsiness with a camera and sensors that measure the driver’s blinking, facial expressions, heat loss from the body, and the car’s internal lighting. It adjusts the car’s internal environment ‘ temperature, air flow, brightness ‘ to help rouse the driver.

The Solution to Drowsy Driving? Stop!

Regardless of driver assistance technology, unless and until cars are equipped with drowsy driver lock-out systems, it remains drivers’ responsibility to pull over and stop when they are fatigued. It is a mistake to rely on tricks such as caffeinated drinks (coffee, power drinks, etc.), opening a window for a blast of cold air, or turning up the music.

Contact Us About a Fatigued Driving Accident in Kentucky

If you have been in a car accident in Kentucky that someone else caused, fatigued driving may have been a contributing factor. The Becker Law Office knows how to look for evidence of fatigued driving and prove that a drowsy driver caused your car accident. Contact us today in Louisville, Lexington or Florence, KY. We can provide a free legal consultation and start developing your case right away.