Going With the Flow or Governor-Enforced Slow: Truck Safety 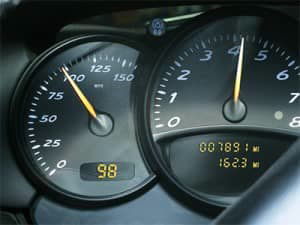 It’s clear that highway safety suffers due to the major differences in size and weight between massive tractor-trailers and lightweight four-wheeled vehicles. Would adding another difference – slower speeds for semis enforced by onboard governors – cancel out the hazards caused by the size mismatch, or would it make the problem worse?

That’s the issue the trucking industry, truck drivers and traffic safety officials are grappling with since a Department of Transportation (DOT) proposal surfaced this spring.

If enacted, the proposed rule would require trucks weighing more than 26,000 pounds to use limiters that set a maximum speed.The DOT has not yet specified a top speed, but 68 mph was previously suggested.

With many Interstates and other freeways across the nation posting speed limits as high as 70, 75 or even 80 mph – and traffic often moving even faster – some have suggested that capping trucks’ speed could create rolling roadblocks that would disrupt the flow of traffic and actually make roads more dangerous.

According to the Owner Operator Independent Drivers Association (OOIDA), it’s safer to keep all vehicles moving at the same speed in order to avoid collisions.

The OOIDA cited data that indicate car drivers’ impatience with slow-moving tractor-trailers is a key a factor in fatal crashes involving cars and heavy trucks. Speed-limiters would make it harder for trucks to pass each other, further fueling other motorists’ frustration.

“Speed limiters will create speed differentials between cars and trucks and cause highways to become less safe,” according to the OOIDA. The organization also noted, “The vast majority of fatal accidents occur on roads other than those designed to interstate highway specifications as well as in areas or under conditions that necessitate speeds less than 68 mph.”

Supporters of mandatory governors counter that high speeds are a bigger factor when it comes to serious crashes involving heavy trucks. They cite data that show trucks – some of which weigh more than 30 times more than a small car – have much longer stopping distances. The distance required to stop increases significantly at higher speeds.

Limiting the top speed ofheavy trucks may reduce serious accidents because truck drivers would have more time to react in emergencies to avoid crashes. If an accident is unavoidable, the resulting injuries may be less severe due to the truck’s lower speed at impact, supporters argue.

Increased fuel efficiency is another benefit advocates assert as a reason for installing speed-limiters on heavy trucks.

A vehicle’s fuel consumption increases at higher speeds. Fuel economy concerns have already led some fleets to voluntarily install governors on their rigs in an effort to save money. The American Trucking Associations (ATA), an industry trade group, has voiced support for 68-mph speed-limiters on all new heavy trucks.

But what’s good for trucking companies’ bottom lines may be bad for truckers’ wallets.

Since many truck drivers are paid by the mile – and because federal rules limit the hours they can drive each day – truckers have a financial incentive to cover as much ground as possible as quickly as possible. Speed-limiters put the brakes on the ability of drivers to maximize the miles they can clock in a given period, cutting their pay.

“Proponents of speed limiters claim that it would level the playing field if all trucks had speed limiters,” according to the OOIDA. Many trucks already have limited top speeds, giving an advantage to drivers whose trucks lack governors.

The debate over mandatory governors on heavy trucks will continue as the proposal winds its way through the government’s rulemaking process. If the DOT’s secretary green-lights the proposal, it will go on to the Office of Management and Budget at the White House. Approval there would mean it could be published as a Notice of Proposed Rulemaking as early as this fall.