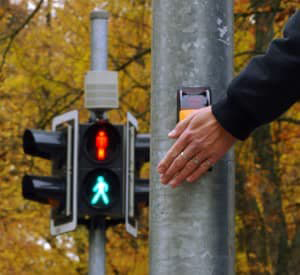 To address this growing problem, Louisville Metro Government just accepted a $307,000 federal grant from the NHTSA (National Highway Transportation Safety Administration) to help improve pedestrian safety in Louisville and reduce the number of pedestrian deaths. Louisville, along with Philadelphia and New York, was selected to receive federal funds because of the high rate of pedestrian deaths, higher than the national average.

Grant monies will be used to fund a multi-pronged approach including a public awareness campaign and officer decoys. The “Everyone is a Pedestrian” will provide education programs on pedestrian safety. Louisville is also launching its own education campaign called “See and Be Seen” to provide pedestrian safety programs at JCPS, improve walking areas for seniors and distribute reflective straps and lights to pedestrians. Funds will also be used to hire law enforcement officers to act as decoys in higher-risk areas and ticket both pedestrians and drivers that fail to follow the rules of the road.

State funds will also be used to address the problem. The Kentucky legislature allocated $12.2 million for road improvements on and around Dixie Highway that sees 30% greater number of pedestrian injuries and deaths, along with a stretch of Preston Highway, than any other roadway in Louisville. Funds will be used to improve the median, add sidewalks and relocate others, and improve the lighting will all be part of the upgrades to help reduce pedestrian accidents.

We see many cases of accidents involving pedestrians and they definitely suffer the worst when it’s man vs. vehicle. Although pedestrians legally have the “right of way”, this right also requires pedestrians to be vigilant when using the roadways and to exercise care for one’s own safety.

Many accidents happen because a pedestrian was not in the crosswalk or the intersection and over 70% of these accidents occur when it’s dark outside. Always use crosswalks and follow traffic lights and signals at intersections. If you’re going to be walking outside after dark, don’t wear all dark clothing. Whether running or walking, wear reflective gear so drivers can see you.

Next time you’re out and about walking around, remember these safety tips:

Louisville has a multitude of outdoor activities, sporting and entertainment venues and pedestrian traffic will only continue to increase so it’s essential to follow the rules to ensure a peaceful co-existence between pedestrians and vehicles. Call the Becker Law Office if you were a pedestrian and injured due to another’s fault. We’re here to answer your questions and help you get the compensation you deserve.