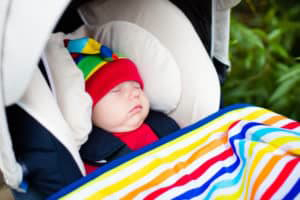 Britax announces the recall of 676,000 strollers following numerous reports of injuries to children after their car seat carriers disconnected from their strollers without warning. The affected models include the Britax B-Agile and BOB Motion Strollers with the Click & Go receiver feature.

All affected models are folding strollers with Click & Go receiver mounts where car seat carriers attach to the stroller frame. The recall includes both single and double occupant strollers of all colors.

The strollers were sold in retailers and online nationwide including Babies R Us, buy buy Baby, Target, Toys R Us, and Amazon.com, among other retailers. The strollers sold for between $250 and $470 from May 2011 through February 2017.

Consumers may contact Britax online at www.us.britax.com and look for information under Safety Notice on its homepage, at us.britax.com/recall, or call 844-227-0300 toll-free. Questions may also be sent by email to stroller.recall@britax.com.

Photos of the affected models may be found at www.cpsc.gov/Recalls/2017/Britax-Recalls-Strollers.