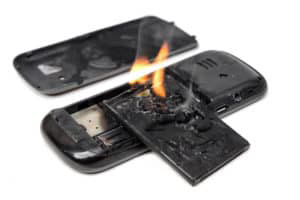 The FAA (Federal Aviation Administration) issued a strong warning Thursday evening, September 8, 2016, advising airline passengers “not to turn on or charge [Samsung Galaxy Note 7 cellphones] on board aircraft and not to stow them in any checked baggage” due to the threat of explosion or fire from a defective cellphone battery.

An FAA Safety Alert in January 2016 warned airlines of the potential risk of “catastrophic hull loss due to significant identified dangers associated with the transport of lithium batteries as cargo on either passenger or cargo aircraft.” Thursday’s warning against Galaxy Note 7 cellphone use is consistent with other warnings of fire, explosion and smoke dangers from ion-lithium batteries in e-cigarettes, laptops, digital cameras and GPS devices stowed in luggage and used onboard airplanes.

Although the FAA warning is an only advisory to passengers and carries no legal weight or enforcement provisions, we believe it is best to following the FAA recommendation to ensure safe airline travel until Samsung replaces the defective battery.