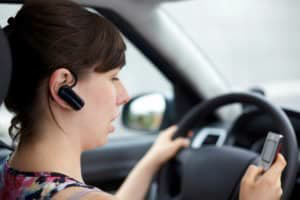 Distracted driving used to mean taking your attention off the road to turn the radio knob, reach in the backseat for something or eat a sandwich while driving. While those are still distractions, new cars now come equipped with options that allow us to check email, text, surf the web and a lot more – making car accidents more likely.

The question is – are auto infotainment systems a convenience in today’s “always in touch” society or accidents waiting to happen, causing drivers to divert their eyes from the road? Regardless of how you feel about the matter personally, statistics show that the latter may be more accurate.

Driving and Infotainment May Be More Than Drivers Can Safely Handle

Having the ability to stay in touch with family and friends, receive news, and use social media sounds appealing, but driving distractions can be deadly. When smart phones became popular, there was concern about drivers not being able to hold a phone, talk and drive their car at the same time.

Automakers addressed the concern by creating in-vehicle systems that allow drivers to do all of the things they want without holding a phone in their hand. Safer? Actually, not at all. The reason—cognitive distraction.

Regardless of how a phone is being used, it distracts the brain from concentrating on the road. According to the National Safety Council (NSC), eight in 10 drivers mistakenly believe that hands-free cell phones are safer than using a hand-held phone. However, the NSC reports that dozens of recent studies show that hands-free devices are no safer than handheld devices.

Research by the AAA Foundation for Traffic Safety shows that drivers can experience dangerous mental distractions even when their hands are on the wheel and eyes on the road. As mental workloads and distractions increase, drivers scan the road less and their reaction times slow, as the research entitled Cognitive Distraction in the Vehicle shows.

Getting drivers to fully appreciate those dangers – and change their behaviors – may be more difficult than people realize. Seventy percent of all drivers say they made a conscious effort to use hands-free devices to be safer drivers. Part of the myth is that auto makers are putting infotainment systems in motor vehicles, which likely have to pass some sort of government regulations, so they must be safe to use.

Although that’s certainly a plausible argument, it’s simply not true. In fact, according to the National Highway Traffic Safety Administration (NHTSA), over 3,300 people were killed and over 400,000 people were injured in crashes in 2012 involving a distracted driver.

AAA says that the proliferation of voice-controlled infotainment systems in new vehicles poses a looming public safety crisis. AAA has called for limits on the use of in-vehicle technologies to use for core driving tasks.

The bottom line is that anyone who uses a cell phone while behind the wheel puts other motorists in danger of suffering death or serious injuries such as traumatic brain injuries (TBIs), spinal cord injuries and broken bones that result in costly medical bills, years of rehabilitation and disability. Distracted drivers can – and should – be held responsible for their actions.

Keep in mind that there will always be an insurance company involved that will do whatever it can to pay you as little as possible. Having experienced counsel on your side can level the playing field – in your favor.