E-cigarette Use Banned on U. S. Airline Flights 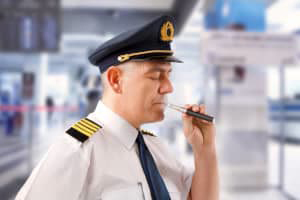 People who use e-cigarettes and other electronic nicotine delivery systems must now do so before boarding a flight in or for the United States, or wait until they reach their final destination to indulge.

The U. S. Department of Transportation (DOT) issued a final rule March 2, 2016 banning the use and charging of e-cigarettes on all domestic and foreign airlines during domestic and international flights flying to, from or within the United States. The rule applies to all passengers and crew members. The ban takes affect April 3, 2016, 30 days from its publication in the Federal Register.

E-cigarettes and other electronic nicotine delivery systems typically operate by using a lithium battery to deliver a heated nicotine vapor that resembles cigarette smoke. Airlines have prohibited the use of cigarettes and other tobacco products for more than 30 years, but this rule seeks to clarify that e-cigarettes, which did not exist when the tobacco prohibition on planes was first implemented, are also banned from use during flights. This prohibition applies to e-cigarettes, e-cigars, e-pipes, personal vaporizers and any other type of electronic nicotine delivery system.

E-cigarettes can be brought onto planes on your person or in checked luggage, but cannot be used nor charged while in-flight.

It is also important to note that in October 2015, the DOT Pipeline and Hazardous Materials Safety Administration prohibited passengers and crew members from packing e-cigarettes into checked luggage. Since 2009, there have been at least 26 instances of e-cigarettes causing fires or explosions in checked luggage. E-cigarettes may catch fire or explode because of a manufacturing defect, because they are damages, or exposed to high temperatures, which can cause them to ignite.