In an increasingly technological world, mobile phone and electronic gadgets have become dangerous distractions for motorists, causing an epidemic of crashes across the nation.

Too often, motorists focus on cell-phone calls, responding to text messages or resetting a GIS, taking their attention away from the road. People also continue driving while juggling food in one hand, putting on makeup or gawking at car crashes while driving.

Put all of these distractions together and you’ve got the makings of an accident caused by inattention distracted driving.

The Centers for Disease Control reports that nine people lose their lives and 1,060 people are injured every day in crashes caused by distracted driving, according to a Washington Post article. That equates to 44 injuries every hour and a fatal accident every three hours.

nhtsa.gov, a U.S. government website, defines distracted driving as any activity that diverts a driver’s attention from the main task of driving.

The problem is greater for young drivers, according to the agency, with distractions reported as a factor in 10 percent of fatal crashes involving motorists under 20 years of age. 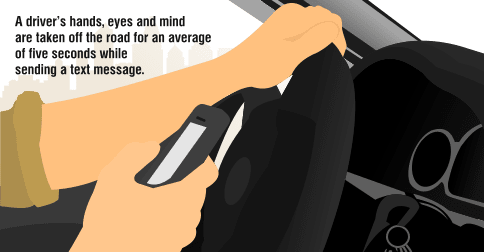 The risk of crashing increases by three times when motorists engage in distracting visual-manual tasks such as reaching for a phone, dialing or texting.

Any activity that involves the motorist’s hands, eyes and attention including sending and receiving text messages, is extremely dangerous.

If you or a loved one are involved in a crash believed to be caused by a distracted driver in Kentucky, Tennessee or Indiana, contact a car accident attorney experienced in investigating car accidents involving distracted drivers. We will review the specifics of your accident and explain your legal rights to seek compensation covering the cost of your injuries, pain and suffering, property damage and lost work time.