Home
Blog
Dealing With Alzheimers Through Its Multiple Stages

Dealing with Alzheimer’s through its Multiple Stages 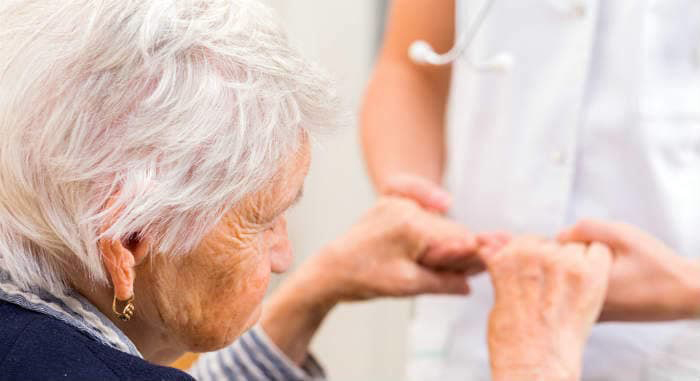 Alzheimer’s disease is a family disease. In addition to the spouse, parent or grandparent who has this progressive and debilitating neurological disorder, family members suffer the gradual loss of their loved one.

Someone in the family, usually a wife, daughter, daughter-in-law or granddaughter of the Alzheimer’s patient, puts their life on hold to become the primary caregiver for their ailing loved one.

The decline into dementia and, in the end, the inability to care for oneself that is Alzheimer’s disease take years in most cases.

Alzheimer’s disease is the 6th leading cause of death in Kentucky and in the United States, the Alzheimer’s Association says. Over 5 million Americans are living with Alzheimer’s, and as many as 16 million will have the disease by 2050.

In 2015, caregivers assisting Alzheimer’s sufferers provided an estimated 18.1 billion hours of uncompensated care and, on average, spent more than $5,000 to provide that care.

As part of raising community awareness of Alzheimer’s disease, we at Becker Law want to thank the caregivers who do so much. In this article, we offer information about dealing with Alzheimer’s as a caregiver during the multiple stages of the disease.

Our guide is a synthesis of information the Alzheimer’s Association provides in more detail over several web pages, plus information drawn from our own experience working with families of nursing home residents.

The Different Stages of Alzheimer’s Disease 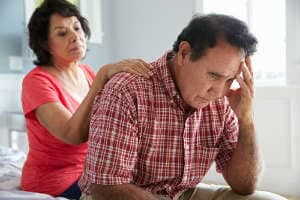 Truly, the first stage of dealing with Alzheimer’s is one of acceptance after a diagnosis has been made. It is a time of mourning for what is to come, and for the future that will not be realized.

The caregiver goes through a stage of acceptance, too, but at this stage that person is more likely the wife or partner, and may not be the ultimate caregiver. We know from our work with Alzheimer’s sufferers and their families that the burden of care often shifts as the disease progresses.

Because Alzheimer’s typically strikes older adults, the patient’s first caregiver and confidant, the first to know of the diagnosis, is usually older as well.

This points up one of the first decisions to be made after a diagnosis, which is how and when to share the sad and unsettling news. While reactions of family and friends may be positive and negative – because of denial or misconceptions – it is better to be open and to educate loved ones about the disease and how they can be supportive.

The early stages of Alzheimer’s are indicated by the first erosion of cognitive abilities. Your loved one will likely still be able to do and enjoy many activities, even including driving and working. However, problems with concentration and memory will emerge and increase as time goes on until they become the norm.

Moderate or middle-stage Alzheimer’s is marked by increasing difficulty in expressing thoughts and performing routine tasks. This can lead to frustration and anger, and oppositional behavior or other behavioral changes. Mid-stage Alzheimer’s is the longest stretch of the disease, and may play out over several years.

Severe or late-stage Alzheimer’s is when patients lose their ability to perform daily life activities. Communication skills eventually fail, as do memory and cognitive skills. Additional personality changes may take place, in particular withdrawal. An Alzheimer’s patient will need help with daily activities and then round-the-clock care in-home care or a move to a nursing home that handles Alzheimer’s patients.

What to Expect at Each Stage of Alzheimer’s

Each person is different in how he or she is affected by Alzheimer’s disease. But there are some mile posts of the stages of Alzheimer’s, which you may recognize as markers of the disease’s progress. Among them are:

Post-Diagnosis: Before final acceptance, expect sadness and varying levels of the other stages of grief:

Your Role as the Caregiver at Each Stage of Alzheimer’s 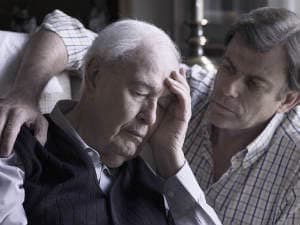 The caregiver’s role changes with the progression of the disease. The partner in early stages of Alzheimer’s becomes an advocate, protector, assistant and, eventually, a nurse’s aide.

The post-diagnosis stage is about planning and balance. First, give the newly diagnosed Alzheimer’s patient time to adjust to their new situation. Give yourself time, too. Be there to talk and listen, with professional assistance if you think it will be helpful.

At this point, the Alzheimer’s patient may still be very independent, so it’s important to allow them to do tasks they can handle.  It is also necessary to step in as abilities erode and safety becomes a concern.

If they don’t show initiative on their own, guide your loved one toward learning about their disease and planning for the future. Together, or on behalf of the patient, research, discuss and make decisions about:

Face mid-stage Alzheimer’s with patience and flexibility. As the dementia sufferer’s ability to function independently erodes, you’ll take on more of the responsibilities for their well-being and how they interact with the world around them.

Much of your attention will focus on adapting to their growing mental and physical losses. As their needs change, your loved one will benefit from as much structure and continuity as you can provide. Ensuring that they receive medical care and other services will be up to you, as well.

As more of your loved one’s needs are moved onto your plate, eventually you may be the only person he or she recognizes.

Part of your responsibility as a caregiver is to care for yourself. It is important that you find a way to keep yourself physically and mentally healthy. In addition to help from family and friends, if available, you’ll need to take advantage of support groups, respite care and other resources in the community.

In the late stages of Alzheimer’s, your role is to preserve the patient’s quality of life and dignity. Your role as an advocate may come to the fore as you rely more on professional help, such as in a nursing home and in hospice care. Before you reach this stage, learn what options are available and what is required of those who provide services to the elderly and infirm.

It is important to maintain your personal connection to the dementia sufferer and their connection to you and their world as long as possible. Play music they enjoyed or read to them from a favorite book. Prepare a favorite food. They may not be able to eat it but, for many dementia patients, familiar and pleasing odors will raise their spirits.

Above all, continue to spend time with and talk to your loved one, even though they may not be able to express the great amount of comfort you provide them.