Can You Text While Driving A Car In Kentucky?

This information could save a life! Please let your friends and family members know about the dangers and laws regarding texting while driving a vehicle. Many drivers are tempted to check their phones and respond to emails or text messages while in the car. Unfortunately, actions that caused distracted driving led to a loss of 2,841 lives in 2018 across the U.S. There is an increasing awareness of the serious hazard posed by texting and driving. It’s among the most dangerous driver distractions.

Many states, including Kentucky, passed laws during the past decade to ban texting while driving. In Kentucky, it is illegal to use a phone or other personal communication device to read, write, or send text messages while operating a motor vehicle in motion. Therefore, you should absolutely not text while driving in Kentucky. The following exceptions apply:

There are many good reasons why this law is in place and it is likely responsible for saving lives every year. The National Highway Traffic Safety Administration (NHTSA) reports that an estimated 481,000 people in the U.S. are manipulating electronic devices or using cell phones while driving in any given daytime moment.

If you have been injured in a car accident caused by texting and driving in Kentucky, Tennessee, Ohio, or Indiana, consult with an experienced Kentucky car accident lawyer. At Becker Law Office, we handle a wide range of automobile accident cases, including accidents caused by distracted drivers who were texting.

Increasing Recognition of Dangers of Texting

Distracted driving, and in particular texting while driving, has become a focus of national concern in recent years because of the number of traffic deaths and injuries associated with drivers focusing on cell phones.

Engaging in any activity that distracts a driver from the important task of operating a moving motor vehicle is dangerous. However, NHTSA says that texting while driving is by far the most hazardous because it requires three types of attention from the driver: manual, visual, and cognitive.

NHTSA reports that, in a recent year, 10 percent of all fatal crashes and 18 percent of all injury crashes involved distracted driving. For that same year, the National Safety Council estimates that 26 percent of all traffic crashes in the U.S. involved talking or texting on hand-held cell phones.

According to a 2015 study sponsored by the AAA Foundation for Traffic Safety, distraction due to cell phone use appears to be far more prevalent than reflected in official government statistics based on police reports. The researchers reviewed footage of nearly 1,700 accidents from 2007 to 2013 in which the cars were equipped with cameras.  The two most distracting behaviors were talking with passengers and cell phone use.

What Kentucky Law Says About Phone Use While Driving

According to the Governors Highway Safety Association, texting is currently banned for all drivers in 47 states. Texting messaging is banned for all drivers in Kentucky, Indiana, Ohio, and Tennessee. In all four states, the laws against texting are “primary enforcement” law. That means that an officer can issue a ticket for the offense of texting while driving alone, without any other traffic offense having been committed.

Unfortunately, drivers make careless driving choices every day, including texting while driving, despite the laws, and innocent people are injured. A knowledgeable lawyer can obtain the cell phone records of a driver who caused a collision and determine whether the driver was using a cell phone for answering or sending text messages at the time of the accident. 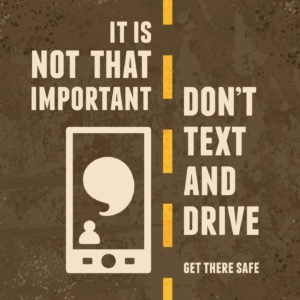 Legal Help for Victims of Texting and Driving Accidents in Kentucky

If you were hurt in an accident caused by the negligence of a distracted driver, you may be entitled to claim compensation for your medical bills, lost wages, lost earning capacity, physical and emotional pain and suffering, and more.

When you work with our firm, our skilled negotiators will fight for your rights with the insurance company. If it is in your best interests to go to trial, your case will be handled by a seasoned trial attorney.

Becker Law Office has been handling cases since 1985 and has represented more than 33,000 clients. Contact us by phone or online to schedule your free case evaluation.

Causes of Car Accidents in Kentucky